December 17, 2019 will forever be etched into the minds of Michelle and Harry Dunn, as this long awaited day marked the official adoption of their foster son, Ra’Mir.

After signing the adoption papers and donning the family’s matching “Today I’m being Adopted!!” t-shirts, foster parent turned adoptive mother, Michelle, can’t help but reflect back on their journey to this moment and all of the teamwork it took to get them here. 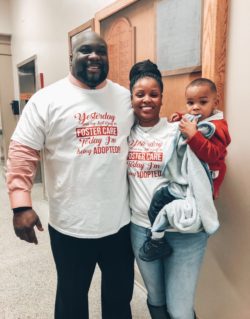 Harry (left) and Michelle (middle) celebrate their son’s adoption with custom made t-shirts.

A mere 24 hours after completing the foster family certification process, Michelle and her husband, Harry, received an unexpected call that would change their family forever. A four-week-old boy named Ra’Mir was ready and waiting to meet his new foster parents and see the place that he would come to call home.

“Starting off I would say it was difficult. Our kids were grown and, you know, parents do everything different now. Literally we had one hour to get a crib, diapers, and wipes, everything… we were asking ourselves, ‘What kind of formula do they use now, how do they make the bottles now?’” Michelle wondered.

The Dunn’s were faced with some unique challenges when first caring for Ra’Mir. Having been born with several health related issues, he often cried at night and would even bump his head in his sleep. However, this did not deter Michelle and Harry from working hard to ensure their new foster son’s health, safety and happiness.

When asked about their decision to become an adoptive foster home, Michelle said, “There is such a great need out there for good foster homes. There are so many children that didn’t ask to be in their current situations and need a safe place to go. We wanted to fill that gap.”

Michelle and Harry’s initial nerves about caring for such a young child were quickly replaced by an overwhelming sense of love and attachment. Michelle says as soon as she held this innocent, beautiful baby boy, her motherly instincts kicked in without hesitation.

According to Harry and Michelle, Ra’Mir’s dimples are his secret weapon. He works them to his advantage and his parents can’t help but turn to putty in his now two-year-old hands. “Oh he works it alright.” Michelle says, “They already get us into trouble.”

The Dunn’s are overjoyed with their adoptive son and have no regrets regarding their journey over the past two years, even though fostering with the child welfare system can be emotionally challenging.

Michelle described the first year and a half as an, “up and down emotional roller-coaster,” never truly knowing what the eventual outcome of the case would be. Despite the unknown, the Dunn’s never lost faith.

“I feel like God’s hands were on this from the beginning,” said Michelle. “All we had to do was be patient and wait for Him to work it out.”

Throughout the long and emotional process, the Dunn’s say their court appointed Guardian Ad Litem (GAL), Dana Hunter, assisted them every step of the way. She helped them navigate the child welfare system and advocated in Ra’Mir’s best interests while in court.

“Dana was the only person that kept it real. She is family for life now,” Michelle said. Harry agreed, describing Dana as the “pillar of connectivity,” bridging the gap between their family and the system.

Despite the struggles and the long wait, if Michelle and Harry could go back, they would not change a single thing. Their patience, commitment and faith in the system were rewarded in the end.

Harry wants to encourage all families with a willingness to persevere and space in their hearts to open their homes and embrace the many other children currently waiting in the Marion County foster care system.

“This is not an adoption process. You are filling a gap, filling a need and there is a great need. So remember to be kind and patient with yourself, your family and most  importantly, be patient with the system.” 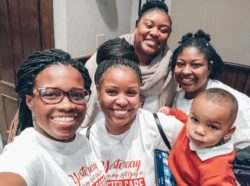