It is no secret that the many challenges of 2020 have touched the lives of people across the globe. However, through all of the stress and hardships that the local and global community has endured together, one must not forget to celebrate the good moments. For the Fairbotham family, these moments include the official adoption of their now 14- year-old foster son, Kavon.

Kavon first walked into Derek and Joseph Fairbotham’s lives as a third-grade student at McKinley Middle School in need of academic and behavioral support. As a special education teacher at McKinley, Joseph immediately went out of his way to assist Kavon in any way that he could. Derek, also a teacher working in Indiana’s elementary education system, understood and even matched Joseph’s instinct to help.

Their connection was instant and only grew over the next two years while Kavon lived with a temporary foster placement and continued to attend school at McKinley.

“I always had a connection with him,” Joseph laughed. “I always told everybody that I thought he was like a son, even though he was not my son yet.”

During the middle of his fifth-grade year, Kavon ran into complications with his foster placement. The goal for Kavon was adoption, and his caseworkers quickly scrambled to find another placement that would meet Kavon’s supportive needs. Unfortunately, the placement that was selected fell in another school district.

In light of Kavon’s looming departure, Derek and Joseph knew they had to act. Almost immediately, the couple made the necessary arrangements to become adoptive foster parents.

While the Fairbothams underwent the certification process, Kavon was removed from McKinley and temporarily placed in another home. Despite this distance, Derek and Joseph remained confident that Kavon’s needs were being met thanks to the constant support of Child Advocates.

“In every meeting [Child Advocates] always wanted the best for Kavon,” Joseph said. “This continued as he was transitioned into our house.”

Through every step of his journey, Child Advocates accompanied Kavon and ensured he felt heard, supported, and cared for. Knowing this, the Fairbothams never lost hope that everything would work out for the best in the end. After several long weeks, the couple’s prayers were answered with one simple phone call.

“Finally one day, [Kavon’s caseworker] called and said, Guess what? His foster placement fell through. Are you and Derek ready for a foster child?”

Without hesitation, the couple accepted and planned out two preliminary visits to ensure comfort and compatibility on behalf of the new foster parents as well as Kavon. By the end of 2018, Kavon had found himself in the Fairbothams’ loving, safe, and supportive foster home with the hopes of adoption sitting just beyond the horizon.

While the three were elated to finally be all together, their journey towards adoption was only just beginning. Court dates were moved, and caseworkers struggled to finalize the termination of parental rights in order to allow adoption on Kavon’s behalf. This process was further slowed by the global pandemic that brought the Marion County juvenile court to a standstill for months.

“It took us over two years to finalize the termination of parental rights. There were many hard nights, but we were careful to never worry Kavon with the messy legal details,” Joseph said.

However, through the emotional roller coaster, confusing bureaucratic process, and even the global pandemic, the Fairbothoms did exactly what a family should do; they leaned on one another for support, never losing sight of the family’s ultimate goal.

By August of 2020, the rights of Kavon’s biological mother had been terminated. A mere few weeks later, the Fairbothoms’ adoption of Kavon was finalized and what Joseph knew to be true all along was official; they were finally a family.

“I knew it was always supposed to happen. My mom and dad had heard stories and my friends all knew how excited I was about him,” Joseph said. “In my heart, I just always knew.” 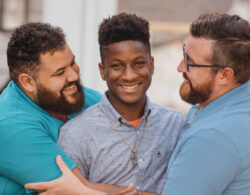 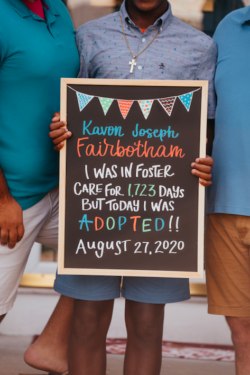